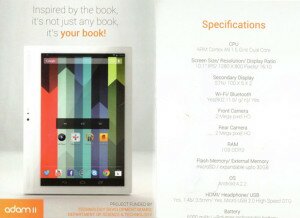 A few days ago we reported that the Notion Ink Adam II was going to be released in June this year, well at India’s National Technology Awards the specifications of the Adam II were revealed. Below are the specs:-

The specifications look promising but would have been better if it had a quad core processor and 2GB of RAM. No word on the pricing and availability as of now.