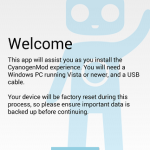 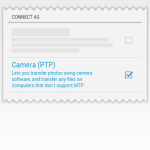 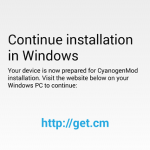 If you just read our article on the Installer release, I’m sure you’re all wondering how the CyanogenMod Installer works now that they’ve released a beta app/beta Windows installer. Well, I’m here to tell you that it’s a simple process with a few perks and one major caveat in my opinion.

1. Start by downloading the app here.

4. The Windows installer will walk you through several steps (if your device is supported)

a. It has you plug your device in, allow your PC’s address always, and then unlock the bootloader.

5. It will load a CyanogenMod bootloader image (the mascot) and download/install the latest official version of the ROM.

6. That is it. It’ll reboot and CyanogenMod will be loaded on your device!

Here’s the deal… If you want to revert your device back to stock, you better be a knowledgeable power user of Android already because there’s absolutely no way to revert yourself. There’s definitely benefits of using Cyanogen over Touchwiz or any of the other OEMs skinned versions, but if you want those features back or need to return your device to stock for whatever reason, you will need to know a lot more than just following an installer/prompt.

If you have a Nexus device, it’s pretty simple and self explanatory if you use something like Wug’s Nexus Root Toolkit. Any other device though, you’ll have to go searching for an answer elsewhere like XDA or RootzWiki.

I ran this on a Nexus 7 (2012), and it installed extremely quickly and simply. I reverted back to stock with Wug’s toolkit so it was simple both ways for me!

If you have any questions, I’ll be more than happy to answer them in the comments!

I work in Network Services. I love music and play a little guitar. Android is my favorite mobile OS, and it always will be as long as Google keeps pushing out fantastic products. The Nexus 4 is my smartphone and will soon be upgraded to a Nexus 5.