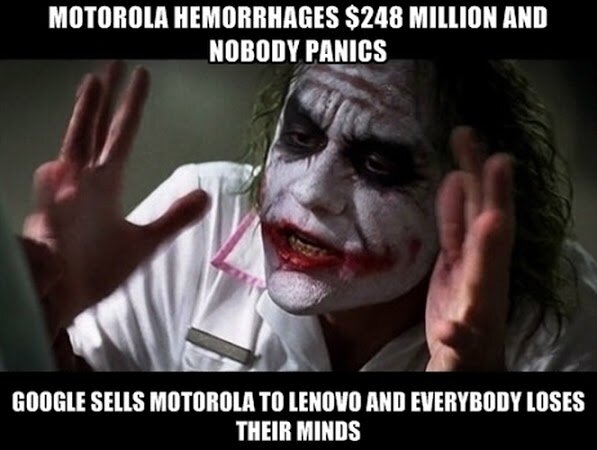 Wow. Just wow. It’s insane to think how in just a few short hours, the entire Android community collectively crapped its pants. Over what? No more Nexus devices? Motorola is being sold to Lenovo? A unicorn just stabbed a hole in Eric Schmidt’s tire?

Do you guys remember when the first Google Play Edition devices hit the Play Store? People freaked out about that too. The Nexus line was coming to an end. Then what happened? The Nexus 5 dropped. Oh yea…

Remember when Google bought Motorola Mobility from Motorola? Googlerola was born and the Android community cried foul play, thinking that this would be unfair to the other OEMs who were now competing against a Google-owned company. Remember what happened then? Dennis Woodside turned blue in his face yelling at everyone that they weren’t getting special treatment. Oh yea…

Now, here we are today, seemingly devoid of the information we already know. My how time flies, eh? Let’s just try to remain calm for a minute here and think this one through.

First off, Motorola has been operating independently of Google since they were acquired in 2012. It was actually a condition of the buyout. Google owning them didn’t change the company. They simply had the resources to go about their business and make a device that they actually dreamed up. Did you forget that the Moto X was a 100% Motorola creation? Google didn’t tell them to make it. They simply had the freedom to actually do it. That’s what Google did to help them. Nothing. They just stayed out-of-the-way.

What about updates? Now, while I want to just scream about this one from the mountaintops, I realize that some people honestly just don’t get this one. See, without having to work a custom skin and tons of extras into the framework, like Samsung and HTC, there’s not much preventing them from timely updates. All the additional stuff in the Moto X ROMs are apps, not tweaks and extras that require extensive remodeling of the Android core. So, what did Google do here that helped the Moto X get to KitKat so quickly? Nothing. Yup, they just left them alone to do their own thing… again.

So what can we gather from this? For starters, consider that Lenovo is the fifth ranked OEM in worldwide market shares. They aren’t some fly by night start-up that just got funding on Kickstarter, like a lot of people make them seem. They know what they’re doing, and they’re doing it very well. Google is sending Motorola off into good hands.

Another thing that people have failed to take into account is the fact that Motorola has been hemorrhaging money ever since Google bought them. Motorola was operating at a loss of $248 million last quarter alone. This was an increase over the same quarter the year before. Google couldn’t save them. Hell, it barely was able to handle its own Nexus 4 and 5 launches, both of which could be called laughable at best.

What else is there? Oh right. You know that crazy division of Motorola that thinks up all the wild ideas like digital tattoos, authentication pills, and, oh yea, Project Ara? Well, that’s staying behind at Google HQ. Try not to lose sleep over it.

Here’s the short version: So long as Lenovo takes the same approach with Motorola Mobility, the updates shouldn’t be hindered in any way. Lenovo is a very reputable brand, with a very strong Chinese and global presence. Even if they do hinder things, the only thing that’s going to change is pretty much nothing. The Moto X in your hand is still a 100% Motorola device. The creation of it is not affected with the transfer of ownership. Please move on with life, and try to keep an open mind.