Up until a short while ago, the only sub-$200, contract-free smartphones, available all ran ancient or unknown operating systems and contained extremely outdated internals. Motorola decided to change that late last year with the budget oriented Moto G smartphone. Instead of including hardware and software more at home in a flagship from several years ago, Motorola thriftily created a phone with a modest spec sheet that belies its $179 starting price ($99 for the Verizon model). 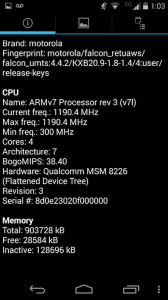 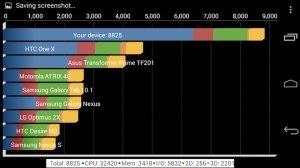 Although Motorola omitted several features that are generally considered standard in most Android phones, overall the Moto G is fairly well-rounded. To ensure everything from web browsing to game play is buttery smooth, Motorola packed the G with a quad-core Qualcomm Snapdragon 400 processor running at 1.2GHz, an Adreno 305 graphics chip, 1 gigabyte of memory, and Android 4.4.2 KitKat.

At first glance, the single Gigabyte of memory would appear to create a bottleneck, but thanks to the phone’s unskinned operating system, it never is. In my ongoing testing, I have yet to become annoyed with memory management. However, if you’re the type who continually leaves tons of tabs open in the browser, like one of my technically challenged parents, expect apps to reload often.

On the processing front, the Moto G is no slouch. The Snapdragon 400 and Adreno 305 chips might be on the lower end of Qualcomm’s current offerings, but they have more than kept up with every task I’ve thrown at it. Modern games like Asphalt 8 run mostly smooth and browsing image heavy techs sites is just as lag-free. More importantly though, I’ve had a pretty difficult time discerning performance differences between the G and other mid-range Android handsets. My Nexus 5 with its Snapdragon 800 processor is clearly quicker, but compared to Snapdragon 600 phones like the Galaxy S4 and HTC One, it’s just as smooth if not smoother. 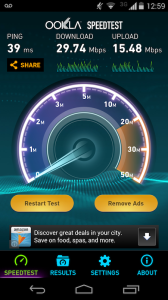 The wireless radios all function as expected. It can’t hit the WiFi transfer rates my iPhone 5C or Nexus 5 do, but only by a few Mbps. Motorola chose to cut costs here by leaving NFC, LTE, and 802.11ac WiFi out. The lack of 802.11ac hardware is pretty forgivable. The 802.11n standard is fast enough for what the majority of us do on our smartphones and wireless AC routers are new (and expensive) enough that relatively few people would even be able to take advantage of it. Not having NFC is a little harder to forgive. Although I’ve found few opportunities to use it where I live, it has been a staple of Android phones since around 2011. The lack of LTE is a moderately disappointing, but 3G is still fast enough to stream music and video without a hitch.

Battery life has been above average in my testing. Light to medium users (1.5-2 hours of screen time per day) can expect the Moto G to easily last two days. Under heavy use conditions, the G easily lasts all day with 4-5 hours of screen on time. Standby time was very impressive in my testing as well. Overnight, it only used 4% with background sync enabled. 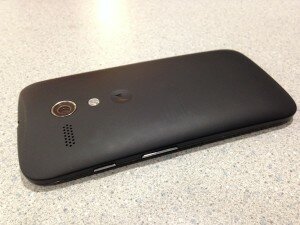 If you’ve held the Moto X, you’ve basically held the G. In a dark room, you’d be hard pressed to feel a difference between the two. The G is almost identical to the X in width and height, and is only slightly thicker. Considering the price range, I have no complaints with the design or build quality. The plastic back tends to hold on to smudges a little better than other phones, but not badly. Fortunately, if it becomes too damaged or dirty, you can replace the back cover with one of seven colorful replacements starting at $14.99. Without a doubt, the G is the one of the most comfortably phones I’ve ever held. 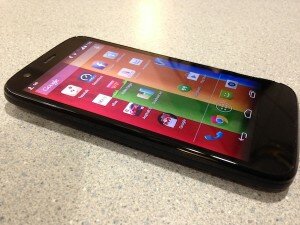 Other phones of size and price range usually skimp on the display. The Galaxy S4 Mini, for example, has a qHD (540×960) pentile display with a PPI of 256. While colors are a little more vibrant on that AMOLED display, the G’s screen is much sharper. In my 20/20 vision, it looks just as sharp as the screens on my iPhone 5C and Nexus 5, though the color range isn’t as good. I couldn’t discern any pixels though and staring at it for extended periods of time isn’t a problem.

The speaker isn’t anything to write home about. It’s loud enough to wake me from across the room every morning (my bed is a literally a hole in the wall). I don’t use the speaker for anything more than alerts though. If I’m doing serious listening, I grab a pair of headphones. 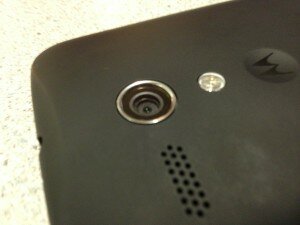 If it wasn’t for the $179 price, I’d be pretty disappointed with the 5 megapixel shooter. It’s about comparable to the 5 megapixel sensor on the 2013 Nexus 7. Most pictures aren’t very sharp, especially if the lighting is poor. It does take them pretty quickly though. The video capture capability is also pretty mediocre. Fortunately for those who love taking selfies, the front facing camera is about average. 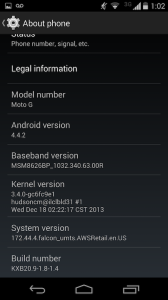 The Moto G runs an unskinned version of Android, very similar to what is loaded on the Moto X. Aside from three Motorola apps and FM radio app, the phone comes with stock Android applications. My unit was received with Android 4.3, which I quickly updated to 4.4.2. Motorola did an excellent job tailoring the software to the hardware. Apps never force close or stop responding. Scrolling and sliding animations are very fluid, even with tasks running in the background. If the Moto X is any indication of how Motorola treats software updates, you shouldn’t have to worry about being stuck on an older version of Android. If you’re the paranoid type though, Google is selling a Play Edition of the phone at the same price but this is not as good of choice for T-Mobile customers. Also worth noting is the free 50 gigabytes of Google Drive storage offered with the G.

Time for the big question. If I had $179, would I get a Moto G or some other phone? Honestly, the thrifty part of me would rather scour Craigslist and eBay for a Nexus 4. That said, many people aren’t comfortable risking their hard-earned dollars on a used phone without a warranty. So, with $179 in my pocket, which new, no-contract smartphone would I chose? Without a doubt, I’d pick up a Moto G. No other contract-free smartphones come close to offering this level of performance and quality at this price point.

Nicholas is a business major student who loves everything Android. Aside from smartphones, his hobbies consist of debate, ultimate frisbee, and sleeping.