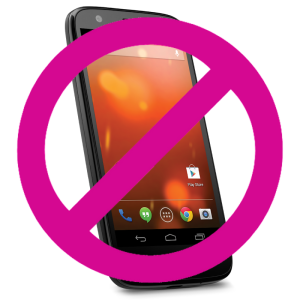 If you’re a T-Mobile customer that was getting excited about the just announced Moto G Google Play edition, well, I have some bad news. Some bonehead in charge of the Google Play devices decided it would be novel to use the Global GSM Moto G hardware as a starting point instead of the AWS friendly U.S. GSM Moto G model.

Who cares, right? Well, T-Mobile did refarm 1900MHz spectrum so you can use the Moto G Google Play edition (or any unlocked GSM devices) in select markets. What about outside of the metropolitan areas? I can tell you first hand that the long stretch between Dallas and Texarkana is a flashback to pre-2008 data speeds where I would otherwise get T-Mobile’s smoking 10-12mbps AWS HSPA and, more importantly, streaming Google Play Music. Also, unlike the HTC One or Samsung Galaxy S4 Google Play edition handsets, the Moto G does not even have AWS LTE to fall back on so you are really out of luck when falling into any 1900MHz dead spots.

Why do I believe this a bonehead move? Google Play edition devices are only sold in the United States. Why wouldn’t Google have used the U.S. GSM Moto G hardware instead? Oh the glory of streaming music on that long drive instead of having to pick and choose what I am going to cram into just 8GB of storage. You can’t learn from your mistakes if they are not pointed out so more of us should have pushed the issue when Google didn’t use the AT&T compatible T-Mobile HTC One or Galaxy S4 hardware for the Google Play Editions. Guess it is just me that thinks you should sell a device that works 100% on the carriers you say it works on.