Moto G Coming to Verizon Prepaid on January 9 for $99 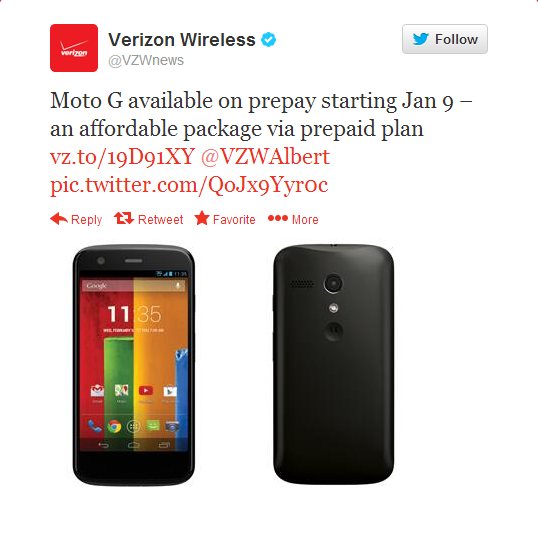 Today, Verizon took to Twitter to officially announce a release date for the Moto G. It will be available for purchase for $99 off contract on January 9th. It has also recently been spotted at Best Buy on the shelves available for purchase at the same price. This a great price for a great phone that was already priced to sell at $179 off contract. Verizon Wireless plans start at $60 for unlimited minutes and texts with 2GB of data.

This is great news for anyone looking to switch to Verizon prepaid service but not finding a device to their liking. The Moto G is not a high-end phone but it gives a lot more than other Android phones at this price point. Motorola is also pumping out OS updates to their stable of phones lately, including Kit Kat to the GSM version of the Moto G a few weeks ago, which hints that the Android 4.4 update mentioned in Verizon’s Moto G announcement for  is not far off.