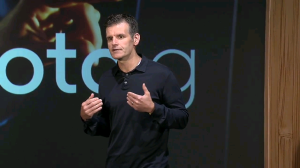 “Most of the world cannot afford a $600 high tier smartphone.” – Dennis Woodside

Moto G Product Manager, Charlie Trisler,  then came up to discuss some of the hardware features of the Moto G. To lead with, the display is 4.5″ 720P at 329PPI. Charlie then compared it to the iPhone 5s noting that the Moto X had a larger display at 4.5″, was 720P and carries a higher pixel density at 329PPI.

The discussion moved on to some of the areas they focused on to optimize the Moto G for both performance and battery life. Battery capacity was not mentioned but the Moto G has an “All Day” battery. He went on to elaborate they worked with Qualcomm to make a highly efficient quadcore Snapdragon S400 1.2Ghz for the Moto G and including 1GB RAM because of the software enhancements. To demonstrate the Snapdragon 400′s performance, they showed the Moto G playing a demo of Minion’s Run.

The Moto G is designed to be customizable, Charlie demonstrated that the removable back shell was going to be available in several colors and can be changed out by the user. Two accessories were also introduced, what Motorola is calling an Active Grip (aka bumper) and Flip Shell that is a flip cover which activates the screen when opened and turns off when closed. 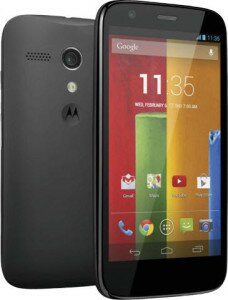 Punit Soni took to the stage next to elaborate on the software optimizations they’ve made for the Moto G. Directly comparing it to the Galaxy S4, Punit stated they tested the Moto G side by side and, at 1/3 the price, outperformed the Galaxy S4 in what they feel are key areas such as placing and answering a call , browser launching time, returning to the home screen and bootup time. 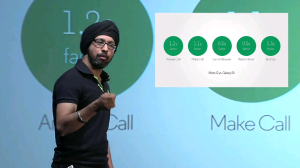 The camera app has been optimized as well, with the onscreen shutter button being replaced with tapping anywhere on the screen to capture an image and the ability to capture a still image while recording video. Settings are accessed by a swipe. Punit said that they recognize that streaming music is difficult in many parts of the world and are including an FM radio. The Moto G will also include additional 50GB Google Drive storage. He ended by confirming they are working on Android 4.4 Kit Kat now and guaranteed the Moto G will be updated by January 2014.

Dennis came back up to discuss some of the launch details. The Moto G is releasing this month in certain markets with global availability in over 60 markets, including North America, January 2014. A Dual-SIM version of the Moto G will also be available in certain markets. The Moto G will be offered in the U.S. at Motorola.com off-contract and SIM unlocked with 8GB storage at $179 and 16GB at $199. It will also be sold through partners (carriers) whose pricing may be slightly higher or lower.

I think this is a good direction for Motorola since they already proved with the Moto X that optimized software gets rid of the need for premium specs. By offering the Moto G at less than $200 sim unlocked and off contract this should make a pretty big impact in the budget space and guaranteed to be updated to 4.4 Kit Kit will keep the techies happy. Especially when compared to other budget devices at that price point, the Moto G is looking like a winner.