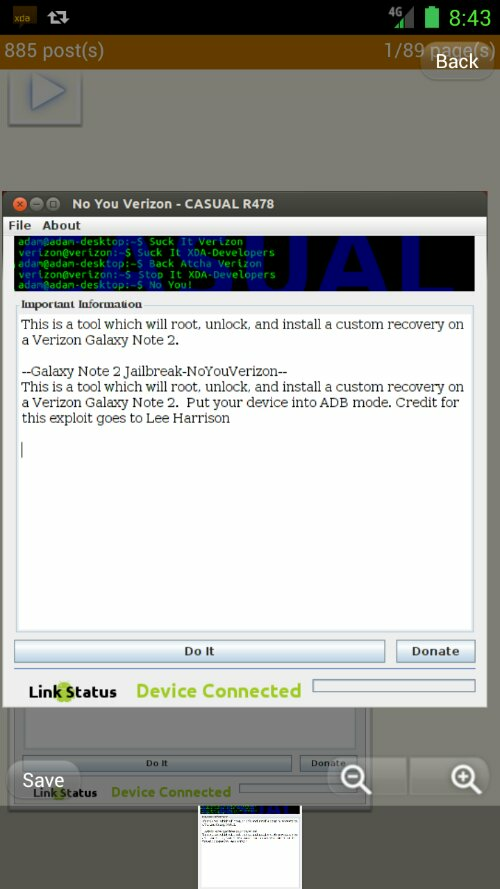 This is by no means ground breaking news, but if your anything like me and change phones on a monthly basis an update or two may happen with a device that you’re eventually going to go back to. Since the Verizon Note 2 is such a popular device I figured I’d put this here for anyone that may be picking a Verizon Note 2 up.

Believe me, there’s no one in the world that loves to fast boot OEM unlock a Nexus device more than me. Its fun, you feel like a boss pulling up that ADB and manually unlocking your own device. With that said, over time with my busy schedule no one enjoys a one click unlock method as well. I used to be against “one click methods”, but realized that it is faster and if the devs, like Adam Outler, are willing to create one for us, then what the hell?

Adam Outler, an absolute maniac at sticking it to the carriers and tearing apart and putting back together every high end device under the sun (check his YouTube channel or Google+ page), and has created a CASUAL tool that one click roots, unlocks the boot loader and flashes TWRP custom recovery on to your shiny Verizon Note 2. It honestly doesn’t get anymore one click than this folks!

I’ve only tested this on a Windows 7 machine, and, within minutes I was in the TRWP home screen creating a backup.

I’m going to bring you to Adam Outlers XDA thread, but before I do, I’m just going to say, as long as you have your drivers installed and the CASUAL tool fired up, you should be good to go.

Before I drop a link for Adam’s CASUAL tool, let me post his little banter going back and forth with Verizon. Verizon doesn’t have the time nor the sense of humor to keep up with Mr. Outler.