CyanogenMod 9 released for the Motorola Xoom 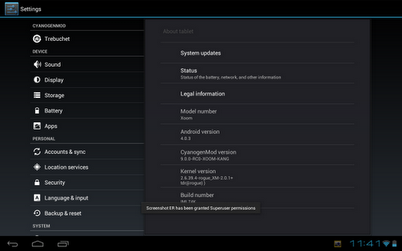 Here we have it folks!  This is something my daughter, Alyssa will be VERY excited about.  She got a Motorola Xoom for graduation last year and every time her and I are talking ROMS and her Xoom she always asks me if CyanogenMod is available for her Xoom.  She would have settled for CM7 (keep your Gingerbread flames to yourself :)….  she’s a CyanogenMod fan, just like Dad).

The XDA Developers that never sleep have brilliantly pulled together a CM9 ROM (Kang), that is as smooth as silk.  There is only one function they don’t have working yet, which is fine with me because of this mug my parents have dealt me.  That is the facial unlocking feature.  I was never a real fan of this feature since watching the official release of the Samsung Galaxy Nexus live on YouTube.  So…..  if this feature never gets built in I’m fine with that, although I know a lot of people are looking forward to it.

Now lets get to where and how you can get this ROM on your shiny Motorola Xoom.

Head on over to Team Rogues thread and be sure to hit that little thanks  button and more importantly hit that dontate button and buy them a red Bull to keep them ROM’s coming.

Here’s the XDA thread for CM9

Well, have at it ladies and gents!  I’m off to find my daughter’s Xoom!